LAb[au], Numen / For Use, Joanie Lemercier, Nonotak and François Wunschel

As we look at the world through machines ‘eyes’ and more of our realities are virtual ones, the dazzling composite that makes up the present becomes increasingly harder to see through. Bright Matter groups five emerging artists whose spatial-aesthetic research further warps our hyper-connected, mediated world. Capitalizing on cutting edge technology in order to manipulate our view, the delusive displays by LAb[au] (BE), Numen / For Use (AT/HR), Joanie Lemercier (FR), Nonotak (FR/JP) and François Wunschel (FR) demonstrate how light articulates reality—and how easily we are deceived. Light and space no longer leave reality unchallenged. When one is used as a medium, the other becomes a canvas, and dazzling new domains, real or otherwise, unfold before our eyes.

Part of a kinetic series of works, LAb[au]’s delicate 0r1gam1_helix RGB (2014) exists in a state of flux. Like clockwork, this wall-mounted cluster of twenty-one triangles slowly changes texture, revealing color underneath its otherwise pristine scales. As the individual segments flip, they mimic prisms, partially refracting the white surface into red, green and blue. Made from paper and animated with memory alloy springs, 0r1gam1_helix RGB produces random loops or sequential machinations. Its reality remains indeterminate either way.

Trapezium, one of Numen’s geometrical N-Light Objects (2008-2014), is a radiant puzzle box. Outlined by tubes of fluorescent light and cast in spyglass, this clear gem can barely contain the kaleidoscopic spectacle within. Like a portal, the quadrilateral volume retracts inwards, collapsing into crystalline reflections as far as the eye can see. Fractal and vertiginous, the neon multiverse forces views along myriad vanishing points. Peer into them and infinity will return your gaze.

With the latest addition to his Light Canvas series (2011-2014), Joanie Lemercier reverses his idiosyncratic approach of extruding two-dimensional geometries with light. Instead of a projector beam animating a print from afar, a rice paper pattern is fixed to a monitor and rear-illuminated. As LCD light traces the triangle mesh, the mosaic comes alive and develops depth and motion. Soon the valleys and peaks of a rugged landscape emerge and, as if viewed through monochromatic, low- resolution camera eyes, we get to orbit an alien world.

Nonotak’s Masks (2014) don’t require animated light for their illusionary display. Entirely analog and still, the duo’s series of framed, triple-layer plexiglas patterns confuses our vision just as we walk by. With each step we take, intricate monochrome moirés flicker, stirring the single diamond or circular shape embedded within. As the formalistic restraint exhibited throughout Bright Matter peaks in Masks, so does the delightful dizziness the show induces.

François Wunschel’s brand-new series of lenticular prints, Rotation, X, Y, Z (2014) reveal uncanny movement in passing as well. The basic geometric objects they depict appear robust and two- dimensional only for as long as we keep still. Move and so will they. A wireframe cube spins and turns into a hexagon, a white polygon volume is awash in dancing light. As we watch objects cycle through different lucid states, our role has changed as well. Frame by frame, we’ve become Wunschel’s aides, animating his display, every step of the way. 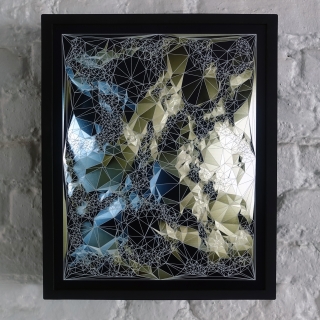