Muriel Guépin Gallery is pleased to present a group exhibit featuring three women who manifest their personal views of nature through their works on paper.  Their delicate and meticulous process lends itself to depicting the subtleties in the patterns of nature.  The intimate nature of their pieces expresses and celebrates how miniscule humans are in relation to the world in its entirety.

Paula Overbay’s colorful dot work paintings mimic the micro and macro patterns in the world.  She describes her pieces as being influenced by “…cells in a petrie dish, the murmurations of birds, the migrations of butterflies, star constellations and especially our mercurial weather.”  All minute details, almost utterances, in a world so vast.  Her work is touching upon particularly feminine roles in society as well.  Continuing the tradition of working obsessively over intimate pieces, similar in process to embroidery or knitting.  Her natural forms move like an expanding ribcage, or the ebb and flow of waves.  The familiarity of the forms make the work that much more relatable, as if someone was holding the cosmos in their hands.

Michiyo Ihara’s obsessively crafted snowflake drawings are a modest flashback to childhood imagery.  She crafts her snowflakes as vehicles for her comprehension of the universe, as she grapples with the concept of being human.  Using these snowflakes as an extension of her arm and experience, she expresses the concept that her body is a shell that mimics the infinite. Ihara believes that “from the microcosm grows the macrocosm…” letting something as small as a snowflake carry her stories, and allow the viewer to unlock something vast.

Dharma Strasser MacColl’s mixed media pieces create landscapes of unique cellular structures using natural and earthly materials.  Using lokta paper, made of the bark of evergreen trees, and clay as catalysts for her cell cultures, she becomes the sole creator of her own micro worlds.  She uses thread as the strands that connect each cell, which allows her to reinforce the feminine qualities of her invented nature.  Creating her pieces on paper makes her cultures humble and non-invasive, which is a uniquely feminine quality.  This allows her worlds to speak for themselves, working together with the viewer rather than fighting against them.

A woman’s experience is unique in that she lives as an oversight, which Overbay, Ihara, and MacColl touch upon alongside their more prominent ideas regarding nature. Their intimate format is an extension of this existence, and is tender in its expression. They all bring attention to the minute and unsung aspects of the world, especially in regards to the bigger picture. 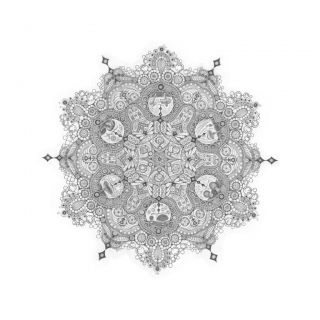