Paula Overbay was born in Longview WA in 1940 and now resides in Brooklyn NY.

She attended the Pacific Northwest College of Arts in Portland OR and received a Bachelor of Fine Arts in Printmaking and Painting in 1978. In 1980 she received a grant to attend Carnegie Mellon University in Pittsburgh PA graduating with a Masters of Fine Art in Printmaking. She then taught Conceptual Design and Drawing at Carnegie Mellon University and Printmaking at the Pittsburgh Center for Arts and Crafts. She began showing in university and New York Galleries and received grants from the Pennsylvania State Council of the Arts.  Her work traveled with the Smithsonian World Print II Exhibition Tour, and was exhibited with the Boston Museum National Print Exhibition and Philadelphia Print Club International Exhibition.

Returning to Portland OR in 1985, she shifted from printmaking to painting and began exhibiting while teaching at Lewis and Cark College. Her works continued into public collections in New York, San Francisco, Portland, Osaka, Honolulu and Denver and she attended several residencies at the MacDowell Colony in Peterborough NH.

In 1997 she moved to Brooklyn NY.  Three residencies at the Ragdale Foundation in Lake Forest, IL gave her the time and freedom for her development of the Constellation Series.

Recent exhibitions have been Penelope’s Constellations at Muriel Guepin Gallery in Brooklyn NY; Paintings at 38 Cameron Gallery in Cambridge MA; Cosmology at Storefront Bushwick in Brooklyn NY; Artronomy at AG Gallery in Brooklyn NY; The Shift-A New Art of Spirit at KNOX Gallery in New York, NY and The Universe: Microcosm and Macrocosm at the  College of St. Elizabeth in Morristown, NJ.  Coming up in 2014:  group shows Shifting Ecologies at The Painting Center  and Earth and Air at LaGrua Center for the Arts, Stonihgton, CT. and solo show in 2015 The Manufacture of Clouds at NYUniversity, New York, NY. 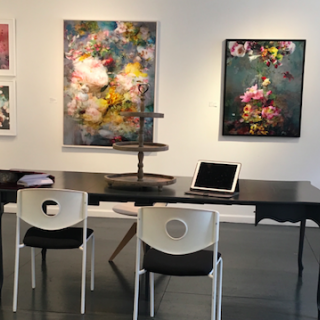 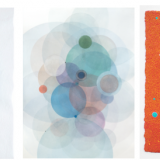 Round It Up! A Summer Group Show About Dots, Circles and Spheres
featuring gallery's artists and more July 20 – August 20, 2016 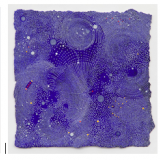