Born in Nice in the southeast of France, I ventured to Paris in 1970 to begin my career in visual arts. After studies at the Fine and Graphic Arts school, I crossed the vast breadth of the Sahara. On the other side of the Atlantic, I traveled north through Central America to Mexico and the United States. I traveled light, but never without my leather briefcase in which I carried paper, colored pencils, and pen. They were, the tools of my trade, the instruments of my art, and rare was the time that I was not putting them to creative use. Not until my return to Paris, however, was I able to establish myself fully as a painter and illustrator. By then, though, the center of the art world was the city of New York.

In the series (Gardens of silence by #), which I started six years ago, I used graphite on paper. Magnani paper for its softness, which allows me to engrave the surface using hard graphite 5H. I started by dividing the surface into multiple shapes then following each edge of the shape as I draw over and over. It takes me thousands and thousands of lines to accomplish the work, microcosmic field where the plow traces the furrow.

Some lines are darker when the time comes for themes to cross each other, (I mark them by pressure of my hand), for the purpose of emphasizing the vibrations of meeting.

In the last series (Appearance by #), which I started two years ago, I used black ink on mylar, layering over and over with a small brush, by constant and light movement of my hand, from left to right, dropping the ink by lightly brushing against the mylar, line after line. With this process, I intend to reproduce the tangle of myriad lines of communication in which we are living constantly.

Whether through nature and the movement of tree branches reflecting on the surface of the water, or through architectural urban structure, they are all my inspiration. I always find deep relations between them.

Mylar is a non absorbent material, and when the ink is applied over and over, this process builds up a tiny skin with different level of thickness, the light is attracted between the grooves, rendering this subtle effect of colors, and this can change depending of the naturel or artificial light exposure, and its density.

By constantly reproducing the same pattern I’m just doing what we are doing every day in our own life, repeating the rites.

When exploring the work in small format, I found intimate connections between drawing and writing. Consequently, I usually call my work on paper the “book of my life”

The simple element of paper, brush, and pencil are all the tools of my work.

Within the details of geometric grid I intend to reflect aesthetically, and metaphorically, the design I imagine to be inherent in the cosmos; through a web of lines I link the microcosmic “us” to the macrocosmic “it.” I give visual shape to a vision that I share with the viewer. And I offer her or him a space for meditation and elevation like the beauty of the cosmic geometry we silently embrace. 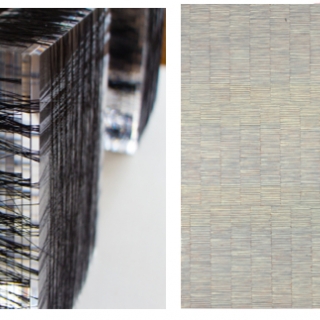