Oil on Canvas mounted on wood board

Born in San Francisco, California, Patrick Dintino grew up in Sunnyvale, in the south bay area. During the time of his youth the region was covered with cherry and apricot orchards, which were soon replaced by business parks with the advent of the ‘Silcon Valley’ tech boom. He went to college in San Diego earning a BA degree in Industrial Arts from San Diego State University, and co-founded Artists in Motion art collective, a group of artists who created funk-art fashion, sculpture and furniture out of reclaimed materials. He also formed a musical group called ‘Naked Earth,’ and handled the art direction for Ecodisc Records. He moved back to the Bay Area and earned a Masters of Fine Art degree at the California College of Arts and Crafts(CCA) in San Francisco and Oakland in 2001. Dintino was invited as a guest artist to work with Sol LeWitt to create “Sol LeWitt: A Retrospective” at SFMOMA. Since this time he was a finalist for SFMOMA’s SECA emerging artist award, and a Pollock/Krasner Foundation Grant recipient. Dintino recently participated in a group show called ‘The Future of Abstraction’ at the Chelsea Art Museum in New York and currently teaches painting at California College of the Arts (Oakland/San Francisco, CA). 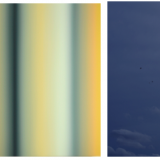